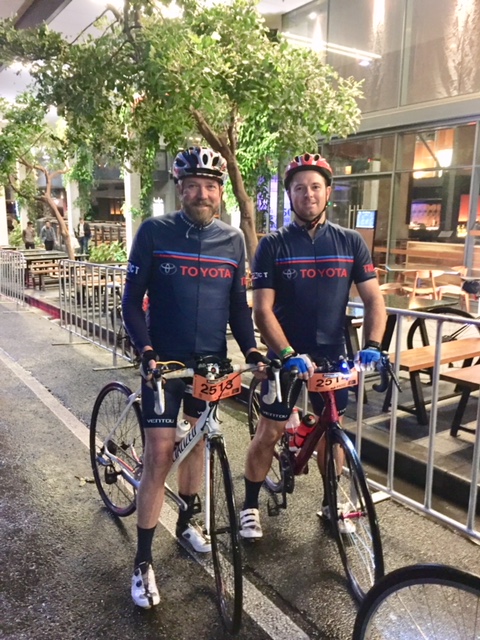 Last Sunday Bill Robertson Toyota saw one of their very own compete in the Brisbane to Gold Coast Cycle Challenge.  The event presented by Bicycle Queensland on October 14th was a fundraiser for beyondblue, Breast Cancer Network Australia, Heart Foundation, Prostrate Cancer Foundation of Australia and Mater’s Smiling for Smiddy.

Bill Robertson Toyota’s Fixed Operations Manager and Gladstone local, Trevor Herbert participated in the event for the first time.  The challenge began at South Bank and travelled along the south east bus way and then followed a combination of service and suburban roads all the way to the Broadwater Parklands at Southport on the Gold Coast, a course of 100 kilometres.

Trevor Herbert said, “It was testing conditions with continual rain and wet roads not to mention the 20 knot head wind. We were told at the start line that there were 4 thousand riders lined up at south bank, quite an impressive sight. I travelled down to Brisbane with my son Joshua Herbert and friend Shane Gardner, in Shane’s brand new Toyota LandCruiser 200 series.

Trevor’s son Josh completed the course and finished in 3hrs 25min, this was his second attempt at the course, he rode last year in even worst conditions. “Josh and I rode as a part of the Toyota team hence the Toyota jerseys we got to wear proudly on the day.  It was great to see so many wearing the Toyota Team jerseys on the day!” Trevor said.

“Fellow team member and Bill Robertson Toyota guest, Shane Gardner teamed up with friend Ken Pollock on a tandem bike to complete the course.  This was a huge achievement for them both as Ken is blind.”

“My target was to complete the course in under four hours, I came in with 3hrs 35min on my bike computer, so objective reached!”  Trevor said.  “I had a maximum speed of 67.7 km/h and an average over the course of 27.8 km/h and even though it was a hard ride I am looking forward to competing in the ride again next year, with a bit more training and experience under my belt”. 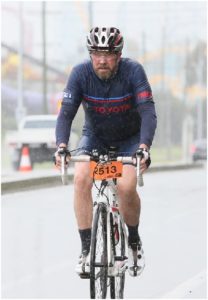