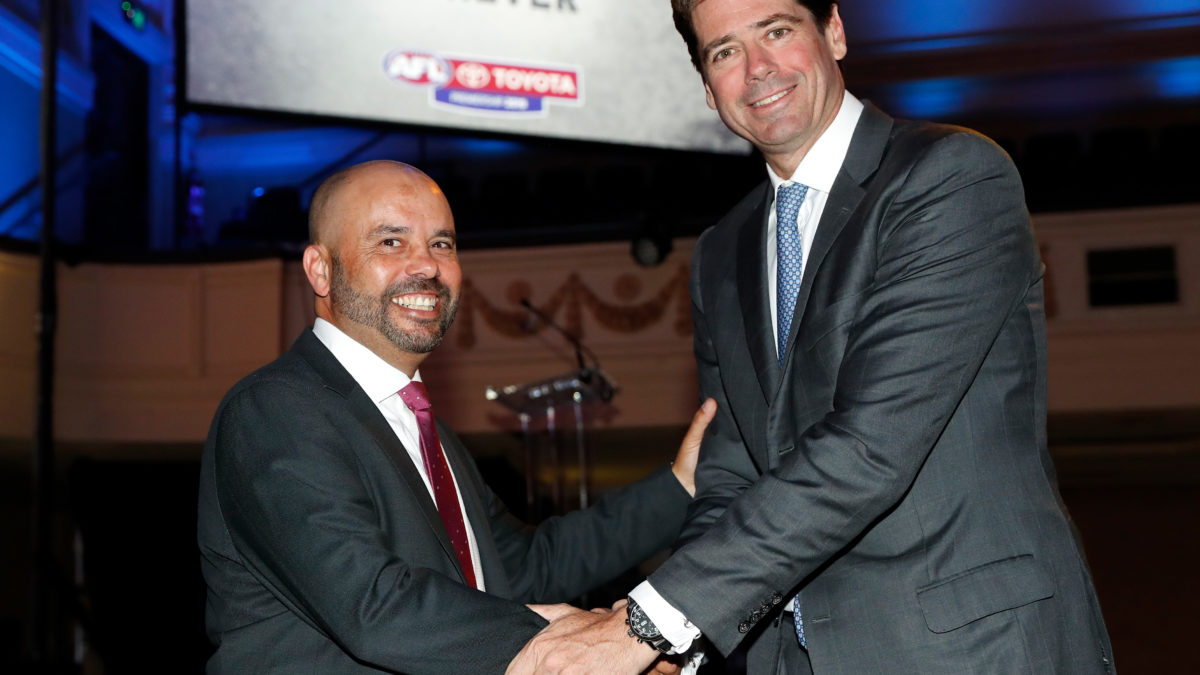 MELBOURNE, AUSTRALIA - MARCH 14: Wayne Gabriel of Toyota (left) and Gillon McLachlan, Chief Executive Officer of the AFL (right) shake hands after announcing a sponsorship extension during the 2019 Toyota AFL Premiership Season Launch at Melbourne Town Hall on March 14, 2018 in Melbourne, Australia. (Photo by Michael Willson/AFL Media)
Toyota Australia has extended its long-term sponsorship of the Australian Football League (AFL) until at least the end of the 2023 season, taking one of Australia’s most high-profile partnership deals to 20 years.

“Toyota Australia, and our network of 279 dealers across Australia, is proud to be a continuing part of the AFL family,” Mr Gabriel said.  “Through this partnership, we are committed to growing this great game on both a national and grassroots level to help footy players regardless of whether it’s in front of thousands of fans or parents cheering from the sidelines.  We see this partnership as strengthening the synergy between our great brands, because Toyota and the AFL are both built on a foundation of passion, dedication and inspiring progress,” he said.

AFL Chief Executive Gillon McLachlan said the support Toyota had provided for many years across all levels of Australian football had been vital.  “Our partnership started in 2004 and over that time the contribution Toyota has made to footy, not only to the elite game, but at a community level is nothing short of amazing,” Mr McLachlan said.   Mr McLachlan said he was delighted the partnership would be expanding even further into grassroots football and now also included AFLW.  “All in all, we are thrilled and look forward to working with Toyota for many years to come.”

Under the new four-year deal, Toyota Australia will continue to be the premier partner of the AFL and, for the first time, the official automotive partner of the AFLW.   The sponsorship also includes naming rights partner for the National Volunteer Awards, the National Inclusion Carnival, the North East Australian Football League (NEAFL), and the National Wheelchair Championships.

Mr Gabriel said a vital part of Toyota’s ongoing sponsorship of the AFL is the Good for Footy program, which focuses on the community clubs that are the breeding ground of future champions.  “Since it started in 2008 Toyota’s Good For Footy Program has raised more than $5.7 million for grassroots football,” Mr Gabriel said.  “As the official Good for Footy Community Partner, we’re aiming to raise a further $1 million in 2019 to help more than 1000 local, grassroots AFL clubs with better facilities and equipment,” he said.

AFL General Manager of Commercial Kylie Rogers said she was thrilled to be extending its long-term partnership with Toyota Australia for another four years.

“The AFL and Toyota have been better together for the past 16 years and we will continue our partnership long into the future,” Ms Rogers said.  “Toyota has made a significant contribution to community football through their Good for Footy program as well as supporting the growth of our elite game. We are delighted to have them as our official auto partner for AFLW and we can’t wait to see what we create together at Marvel Stadium.”

Earlier this year, Toyota Australia also announced it has extended its sponsorship of the Adelaide Crows until at least the end of the 2023 AFL season.  On top of its long-term sponsorship of the AFL, Toyota’s involvement in major sport throughout Australia includes its support for Cricket Australia and the Australian Olympic and Paralympic teams.  On a local level, Bill Robertson Toyota was pleased to sign on as the 2019 naming rights sponsors for the Gladstone team, the Bill Robertson Toyota Gladstone Suns.