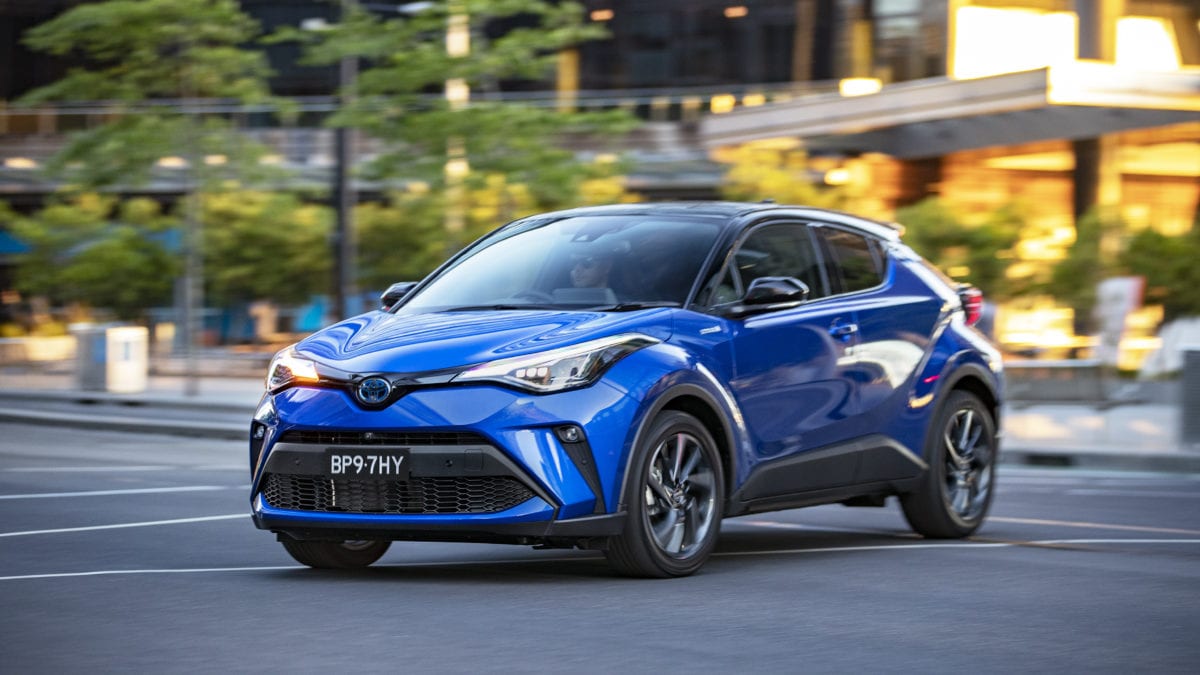 2020 Toyota C-HR Koba Hybrid
**Record sales of Toyota hybrids in Australia**
**Rapid expansion forecast in popularity of hybrid vehicles**
**Unprecedented demand for hybrid vehicles**Local sales of Toyota’s hybrid vehicles have soared to all-time records on the back of surging demand for their combination of performance and fuel-efficiency.  Australian customers have bought a record 7,597 Toyota hybrids so far this year, a gain of 166 per cent over the same period last year, with hybrids accounting for more than half of all RAV4, Corolla and Camry sales.

The hybrid tally so far in 2020 represents almost one-quarter of the company’s sales (23.4%) compared with fewer than 10 per cent (8.8%) for the same period last year.  It means Toyota hybrids, as a stand-alone franchise, would now rank seventh in the market compared with 13th last year when hybrid deliveries hit a calendar-year record of 27,846 vehicles.

Last month, hybrid sales were the highest for any month since the company began selling hybrids in 2001 with the Prius.  Almost 4,500 hybrids were delivered to customers in February (4,497) – the first-time hybrids have exceeded 25 per cent of Toyota’s overall sales (25.4%).

Toyota Australia Vice President Sales and Marketing Sean Hanley said demand for hybrids was accelerating faster than expected, resulting in the company lifting its 2020 target well above the original forecast of 40,000 sales.

Mr Hanley said inquiry and consideration of hybrids had skyrocketed over the past 12 months with online searches doubling for “Toyota hybrid”, along with a similar uptick in unique visits to specific toyota.com.au “hybrid” pages.

“We successfully negotiated additional shipments of hybrid vehicles that will arrive throughout 2020, but even these higher supplies are under pressure due to the unprecedented popularity of hybrids,” Mr Hanley said.

“The boom in inquiry, consideration and sales with our latest hybrids underlines the success of Toyota’s global strategy to popularise electrified vehicles to reduce fuel consumption and carbon dioxide emissions,” he said.

“At the same time, it means that delivery times for some variants will not improve as quickly as we had anticipated. While this is clearly not desirable, we will keep negotiating for an even greater share of global production.

“We’ll continue to keep our customers updated through our dealers. And, after seeing the journey of hybrid vehicles over the past 20 years, I know they’re truly worth the wait.”

The popularity of hybrid vehicles in February propelled RAV4 to second and Corolla to fourth on the top-sellers list, which continues to be led by Toyota’s HiLux.

Read more about the benefits of hybrid here.