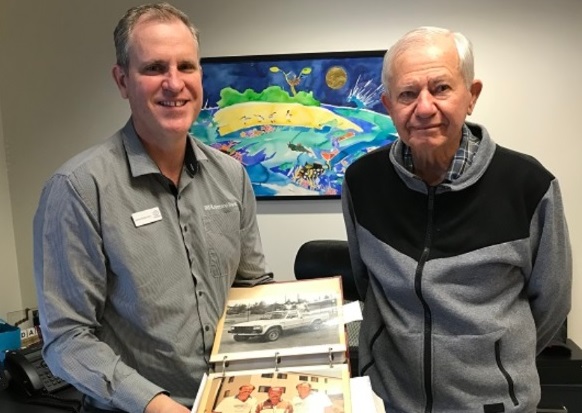 For almost 50 years, the Gladstone community has been superbly served by Bill Robertson Toyota Gladstone.  It’s an institution and father and son Bill and James Robertson share many a memory.

In the early 1970s, Bill Robertson and his brother-in-law took over a business, originally called Dahl Brothers.  It was the very early stages of what is now a successful family business called Bill Robertson Toyota Gladstone.  Bill, 80, fondly recalls the time when the foundations were laid.

“We changed the name to Bill Robertson Toyota after I got the Toyota franchise which was in 1973,” he said.  “It’s had its ups and downs, don’t worry and managed to survive.”

The COVID-19 pandemic tested the mettle of this car dealership business.  Dealer principal and son of Bill, James, said the company weathered the coronavirus storm.  “We’re fortunate and it’s been challenging, but we’ve had longer, more prolonged periods of recession in Gladstone before,” James said.

Bill added in 1982, the business had 1590 new cars registered in Gladstone and in 1987 there were 530 – an indication of the global financial crisis of ’87.  “It took to the year 2000 to get it back to 1500,” Bill said.  Things were challenging during the first six weeks since the pandemic took a stranglehold.

However, James said things are on an upward trend.  “Since then, people have gone back to work and we’ve been pretty fortunate,” he said.

Bill Robertson Toyota’s location was in Boles Street in the early years and Bill said there were 14 people on the staff there.  In 1977, as the business grew, the premises moved to 84 Hanson Road – the more industrial location of Gladstone.  Bill said the products were different to what they are now.

“Well, when I took it over, it was a international harvester franchise and the business there sold irrigation, chemicals, fertilizer and a variety of stuff used around the farms and that sort of

James said the connection between the Gladstone Suns and his company was because of Toyota’s strong connection with the AFL.  Of course there is the Gold Coast Suns in which Gladstone has allied its brand with.  Gladstone and the Suns of the AFL variety have almost identical guernseys.

“We always like to do something and we did the Gladstone Suns because Toyota has a big history of sponsoring AFL and there are some programs that we can easily bring to Gladstone and benefit the community with,” James said.  Bill Robertson Gladstone Suns is the company’s biggest sponsorship commitment and James said his business do sponsor the Yaralla Bowls Club.

Bill said the family business was heavily involved in the Gladstone Rugby League (now called Rugby League Gladstone!).  “When I first came here I sold international trucks and I knew all the truckies and a lot of those blokes were part of the league committee,” he said.

“They started off at Marley Brown Oval and I admire their efforts and they did a real good job.  “So I started to sponsor them (Gladstone Rugby League).”  There was a Bill Robertson Toyota Bar in the south-eastern corner of Marley Brown Oval.  Bill said the bar was well populated during games.

“In those days the crowds were a little bit responsive you know and they (crowd) sort of let you know what they thought,” he recollected.  “At every grand final, the association (Gladstone Rugby League) used to get the police coming out. “One year, a policeman told ‘look we are sick of you blokes, you mob of drunks, look after yourselves’.  “The game starts off and we are all shitting ourselves wondering what’s going to happen.”

Bill went on further to say that after the first game, there were three car loads of policemen and they all patrolled around Marley Brown Oval.  “Everyone that had a beer, they (police) grabbed it and threw it over the fence and then they went back to the bar where they stood,” he said.

“The game preceded without any interference and at the end of it, everyone was congratulating themselves on the fact that it was so good.”  However, around the bar, arguments and a fight broke out.  The leader of the police present, Bill recalled, was a big man who was well known in Gladstone.

“When these two blokes started fighting, he just ambled over to them and grabbed one of them around the neck and another policeman was at this Falcon panel van.  “He opened up the doors and the copper went ‘bang’ and just shut the doors,” Bill said.  “Then he turned around and said ‘anyone else’?”